Blastamac is an asteroids clone I wrote using SCADS on the Sam Coupe. In place of asteroids it uses the heads of people from the SAM scene -- with photos taken from the previous SAM & Spectrum show in Gloucester. The name Blastamac is because one of the heads is Colin MacDonald (the original editor of FRED disk magazine). One of the heads (a "UFO") shoots back, to add a bit more of a challenge.

Like all my SCADs games it is painfully slow. Oh well. 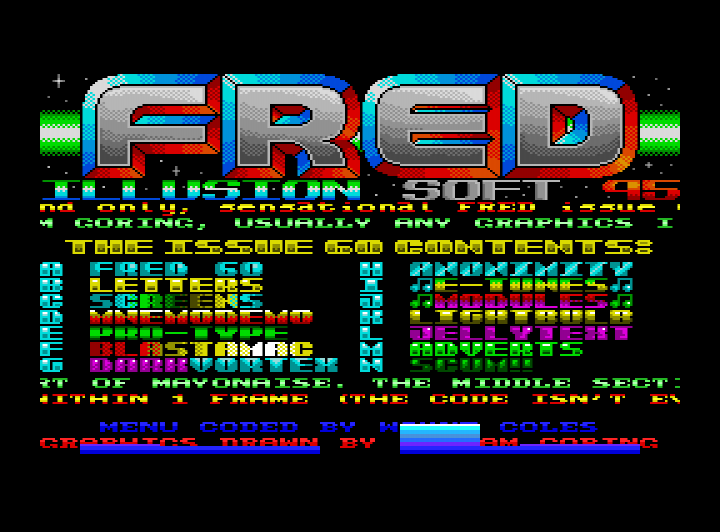 I seem to have had multiple ideas for names, internally it's called "Sam Show-teroids" but the background says "Blast-A-Mac & More" which was the name used on FRED.

Well I call it 'Space Chowder'. Howdy, this little, gamette (or gametta) is a redo of the famous old game Blasteroids.

So whats new? Well instead of shooting rocks you instead shoot heads of various Sam bods. And thats not all, also there are loads of lovely options for you to customise the game to your liking.

Also when you reach the third level UFO's in the guise of a head start arriving and shooting at you. These are also completely customisable. So dont hang up you space suit just yet! No, instead stick on you space socks, space shoes, space shirt, space suit, space tie. Now, you may have forgotton your underwear & trousers, but theres a universe to save, so forget it, and get out there and show them what your made of (if they dare look that is).

Over the page [Press A Key] there isn't this page.

Controls.. I've often said that the controls are important and this is no exception, however if you send £10 to me I let you off and let you play without the controls.. They are - Cursor Up ^ Cursor Left <--- ---> Cursor Right Space = Shield Up (Release drops shield) CNTRL = Fire (hold down for continuous fire)

To slow down simply thrust in the opposite direction, also turning off your SAM will stop you ship dead, kill all enimies, wipe your score, wipe the game and maybe even the windows.

Available in your area now, as if they never were -

SAFARI SAM £5.50 - Platform game with 3 levels, loads of collectables and things to shoot. Varying difficulty levels, and other options along with some nice converted PC Graphics.

Enough to keep you occupied for a while. METROPOLIS GAMES 1 & 2 - A small selection (2 games per disk) of mini games at £1.50 per disk

All these are available from SAM PD / F9 Software

Er, is anybody reading this? Any comments on this, and any of our other games can be sent to this address - METROPOLIS SOFTWARE (...) Also, we're always looking out for new programmers/coders & artists

THIS IS A BLANK SPACE

In FRED 69 Mark Steele wrote in to ask

Going back a while to issue 60, a game called Blastamac appeared containing pictures of the SAM "guys" and after playing it for ages I discovered this picture of a bloke who looks like Martin Clunes from Men Behaving Badly. Who on earth is he? (If you say Martin Clunes then I lose a fiver so please don't).

Colin Anderton guessed it was MacDonald himself

Blastamac contained smaller versions of the people photographed at a SAM show and put on FRED. As far as I remember, Martin Clunes wasn't at that show. Martin Clunes? Big ears, big lips. Sounds like Macdonald to me. Apart from that, pass.

In the game one of the character's heads shoots at you. I had planned this to be Colin MacDonald, but I couldn't find any pictures of him with his head sideways -- I wanted the bullets to come out of the "mouth" -- so used someone else's photo.

At the next Gloucester I met the person who's photo I used for the shooting head, who unfortunately thought I'd deliberately picked them as an insult. Oops.

There is a bug in the menu when toggling the sound it displays a debug print message that flickers in the top left.