KropBot is a little multiplayer robot you can control over the internet. Co-operate with random internet strangers to drive around in circles and into walls.

If it is online, you can drive the KropBot yourself!

If you already have a working 2-motor robot platform you can skip straight to the code. The code shown below will work with any Raspberry Pi with WiFi (Zero W recommended) and MotorHAT.

KropBot v1 was mercilessly driven down a flight of stairs. He is no more, he is kaput. He is an ex-robot. See v2 below for the new chassis.

The chassis I used came pre-constructed, with motors in place and seems to be the deconstructed base of a toy tank. The sales photo slightly oversells its capabilities. 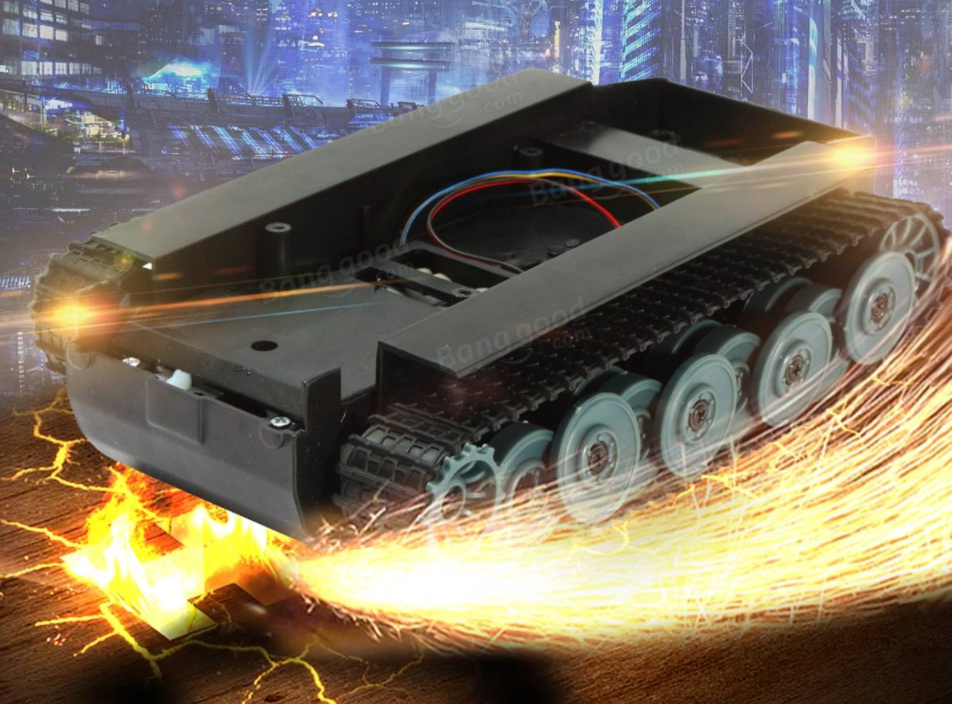 There was no AA battery holder included, just a space behind a flap labelled 4.8V. The space measured the size of 4xAA batteries (giving 6V total) but the 4xAA battery holder I ordered didn't fit. However, a 6xAA battery pack I had could be cut down to size by lopping off 2 holders and rewiring. Save yourself the hassle and get a chassis with a battery holder or see v2. 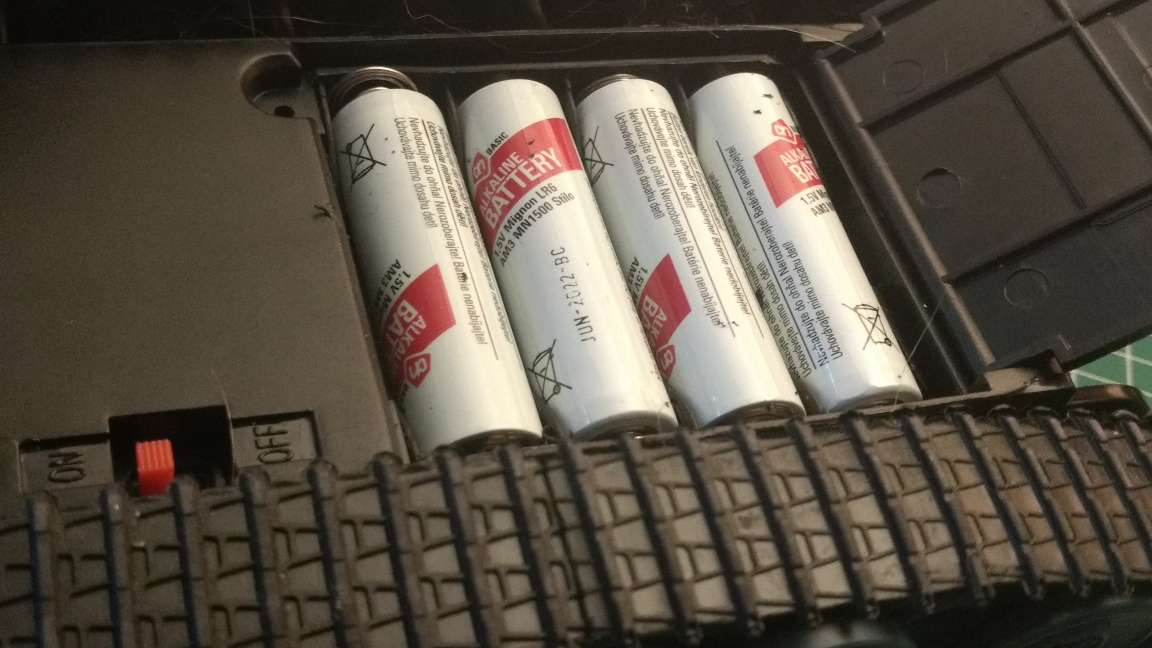 The pack is still a bit too deep, but the door can be closed with a screwdriver to wedge it shut. 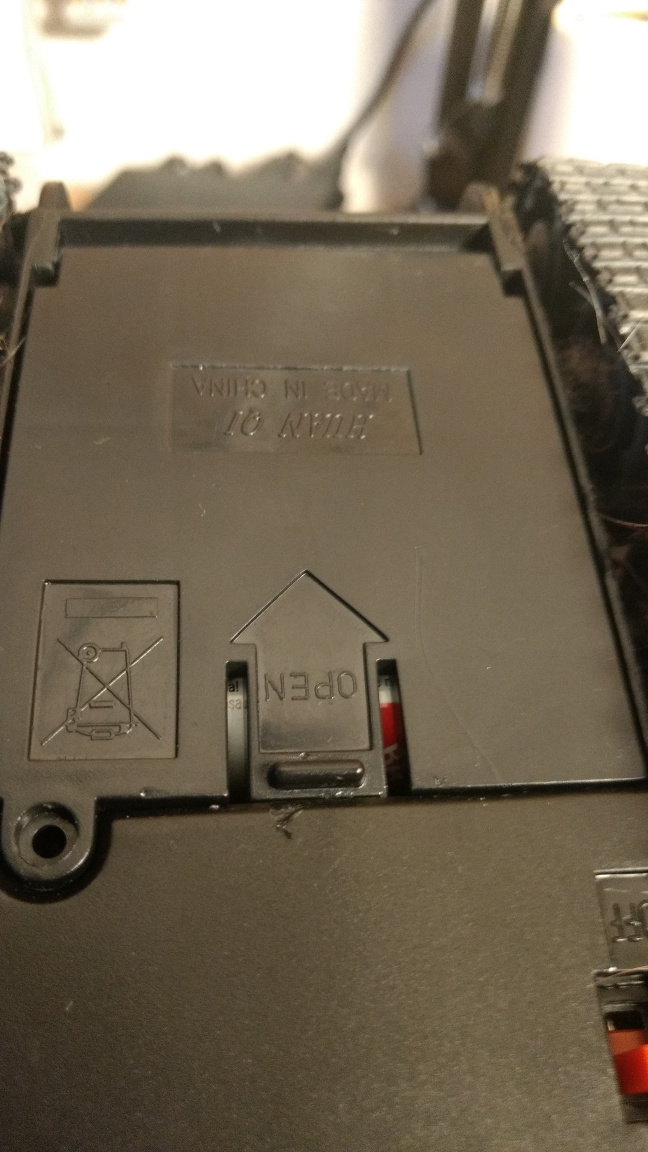 An ON/OFF switch is provided in the bottom of the case which I wanted to be able to use to switch off the motor power (to save battery life, when the Pi wasn’t running). The power leads were fed through to the upper side, but were too short to reach the switch, so these were first extended before being soldered to the switch. 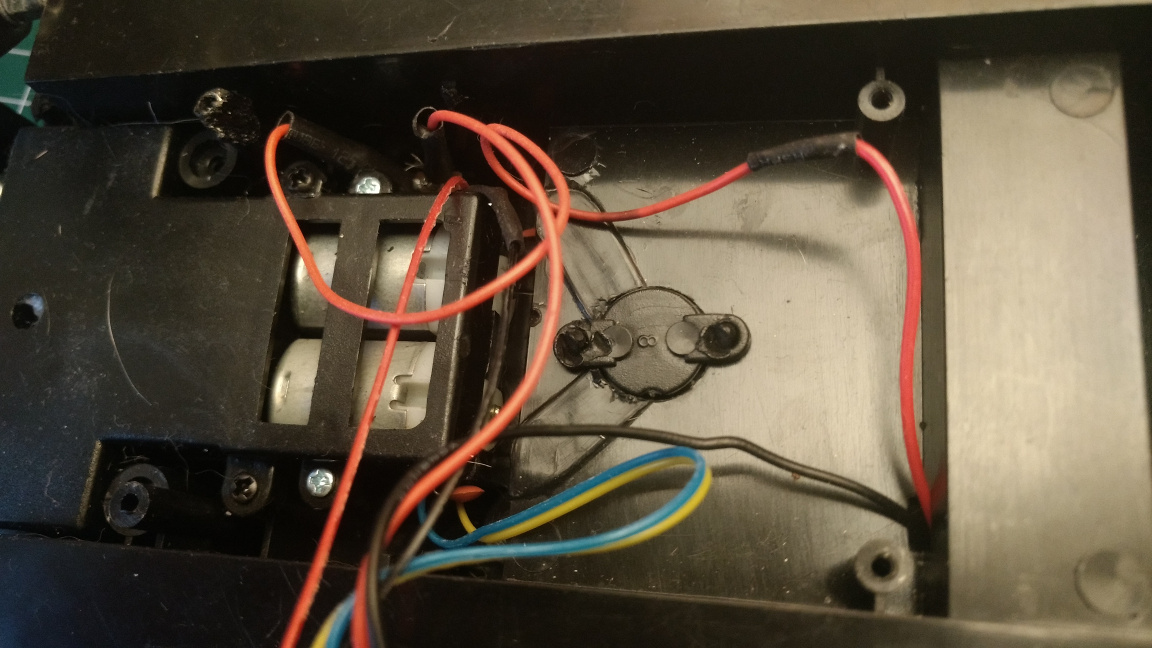 On 15th August 2017 at approximately 13.05 EST KropBot was driven down a flight of stairs by a kind internet stranger. He is no more. 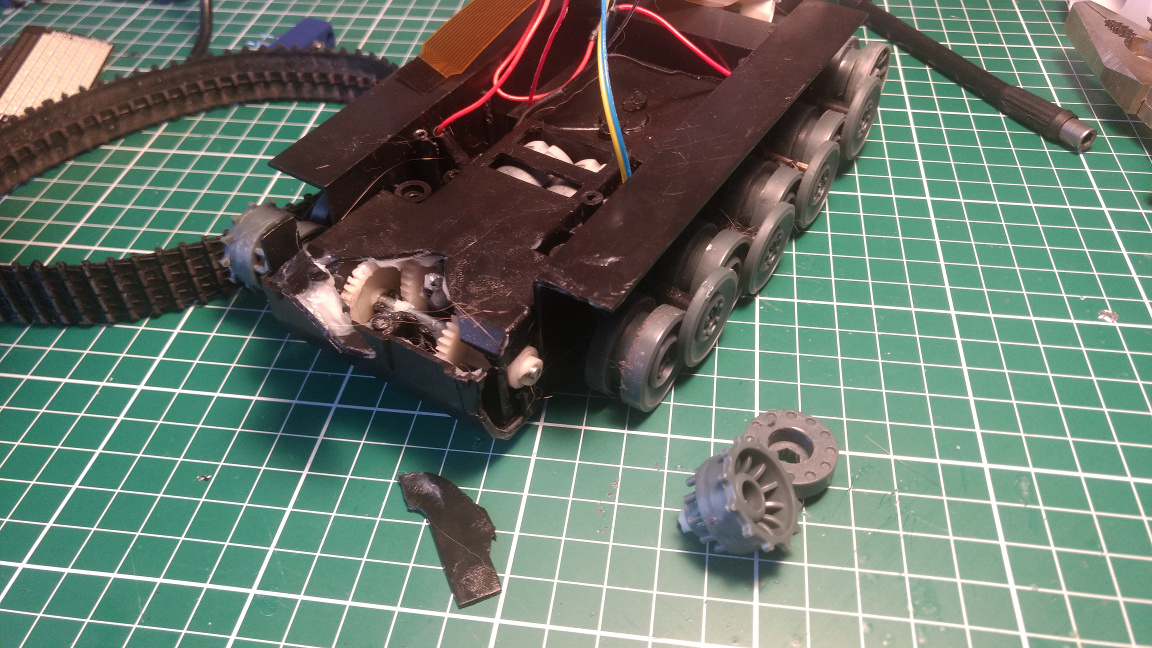 Following the untimely death of v1, I rebuilt Kropbot using another chassis. This is a standard base kit for Pi/Arduino robotics, which used 4 drive motors with 4 independent wheels. To support this the code was updated to support a 4WD mode.

The MotorHAT (here using a cheap knock-off) is a extension board for controlling 4 motors (or stepper motors) from a Pi, with speed and direction control. This is a shortcut, but you could also use L293D motor drivers together with PWM on the GPIO pins for speed control.

Once wired into the power supply (AA batteries) the MotorHAT power LED should light up. 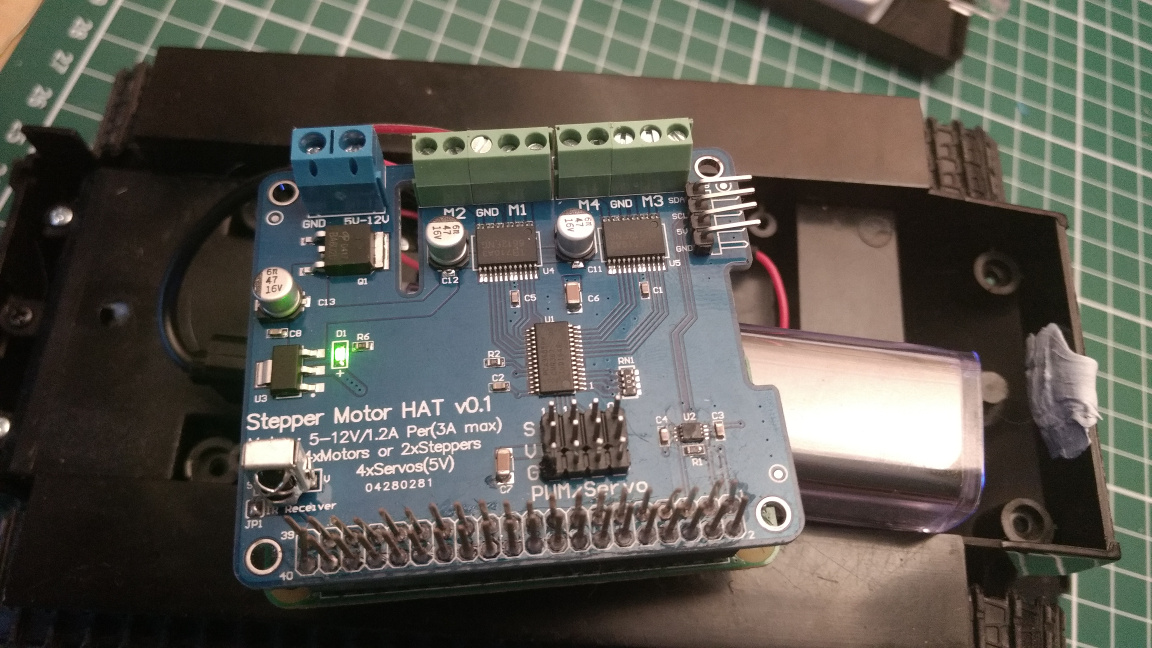 The motor supply is wired in separately to the HAT, and the board keeps this isolated from the Pi supply/GPIO. The + lead is wired in through the switch as already described.

Next the motors are wired into the terminals, using the outer terminals for each motor. The left motor goes on M1 and the right on M2. Getting the wires the right way around (so forward=forward) is a case of trial an error, try one then reverse it if it's wrong. 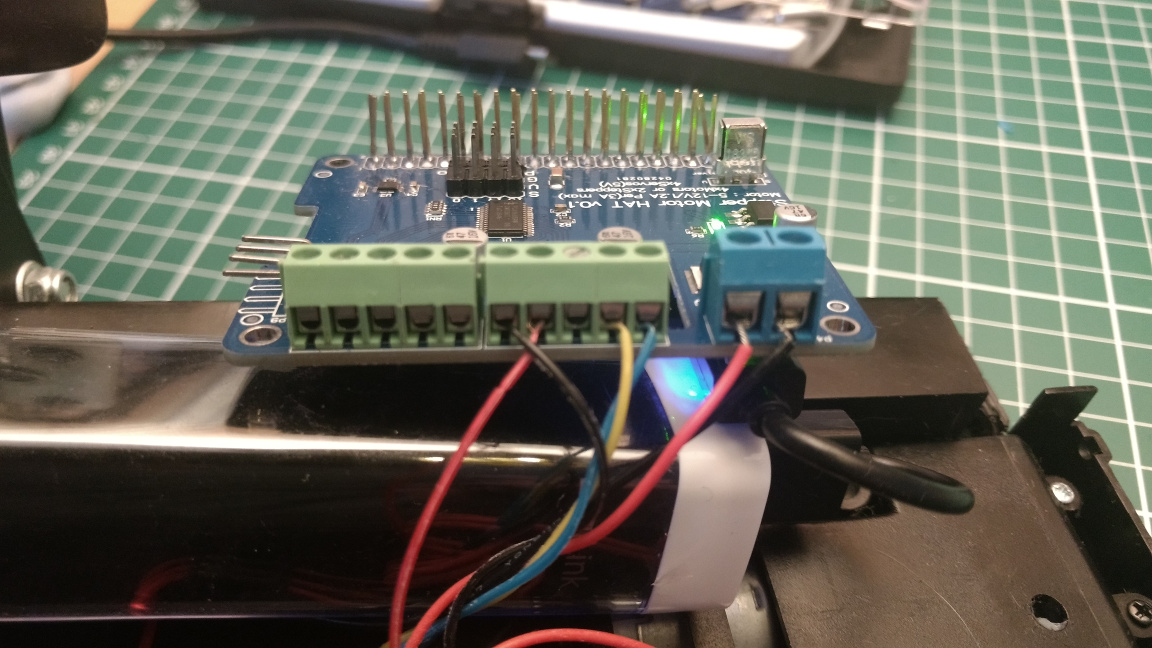 Once that's wired up, you can pop the MotorHAT on top of the Pi. Make sure it goes the right way around — the MotorHAT should be over the Pi board, on the top side.

The Pi Camera unit attaches into the camera port on the Pi using the cable. If using a Pi Zero you need a specific connector for the camera which is narrower at the Pi end. Make sure the plastic widget is on the port to hold the cable, line the cable up metal up and push it in. 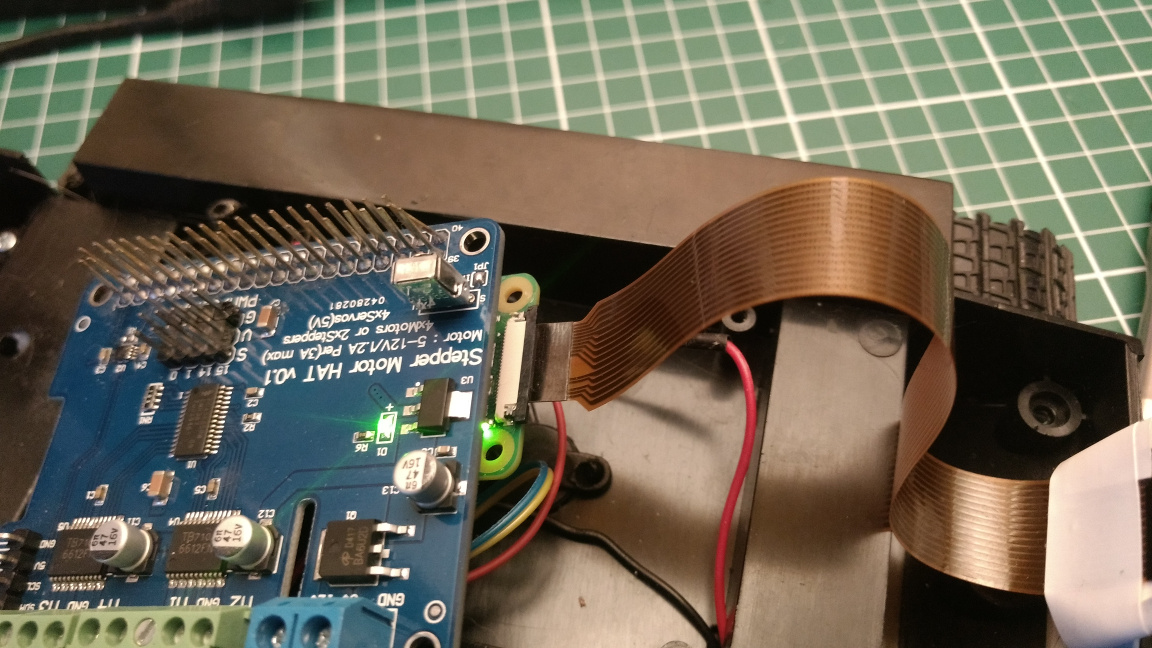 The camera assembly isn't fancy, it's just tacked to the edge of the base with some card and tape. 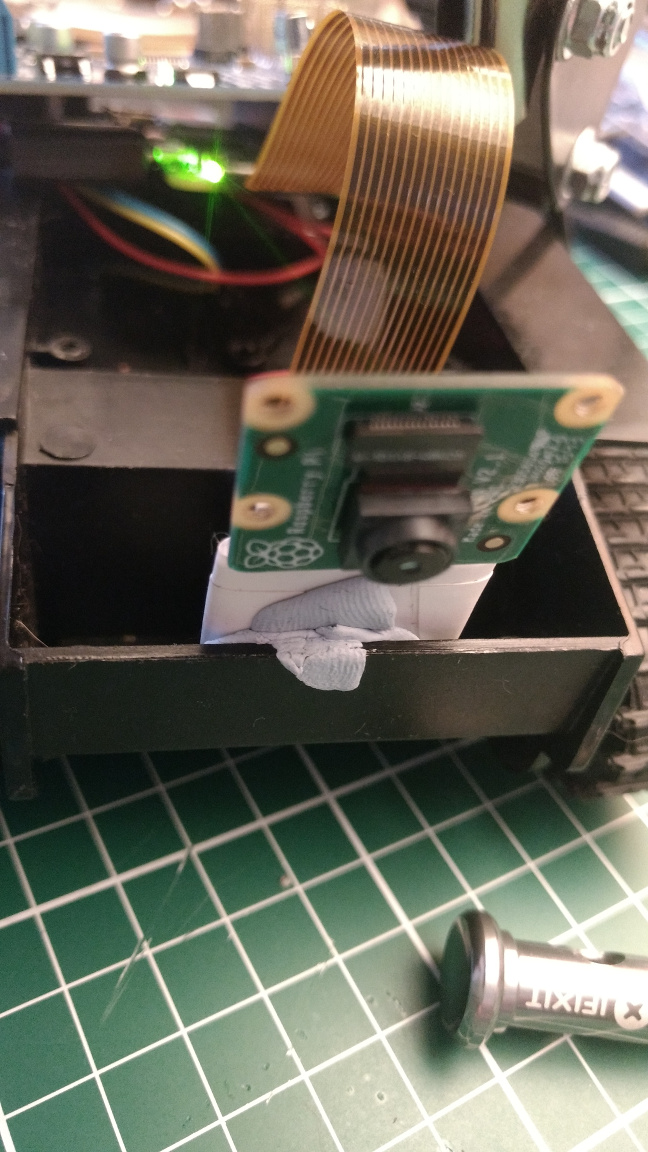 Once that's one you can power up the Pi with a powerbank. I recommend using a normal lipstick-style mobile powerbank as they're cheap, easy to charge and will easily run a Pi Zero W for a few hours. If you want longer runtime or a permanent installation you could also look into 18650 battery cells with a charging board. 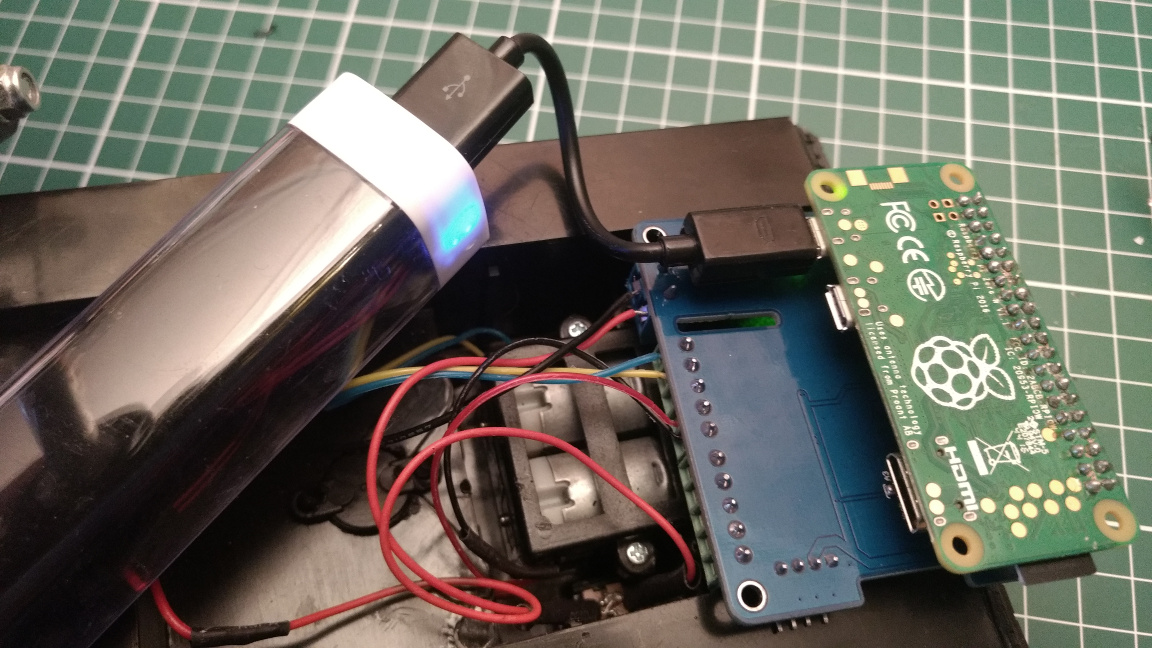 The robot control code is split into 3 parts —

The server isn't strictly necessary in this setup — the Pi itself could happily run a webserver to serve the client interface, and then directly interface with clients via websockets. However, that would require the robot to be accessible on the internet and streaming the camera images to multiple clients would add quite a bit of overhead. Since we're hoping to support a largish number (>25) of simultaneous clients it's preferable to offload that work somewhere other than the Pi. The downside is that this two-hop approach adds some control/refresh delay and makes things slightly less reliable (more later).

The full source is available on Github.

The browser part, which provides the the user-interface for control and a display for streaming images from the robot, was implemented in AngularJS to keep things simple. Just the controller code is shown below. 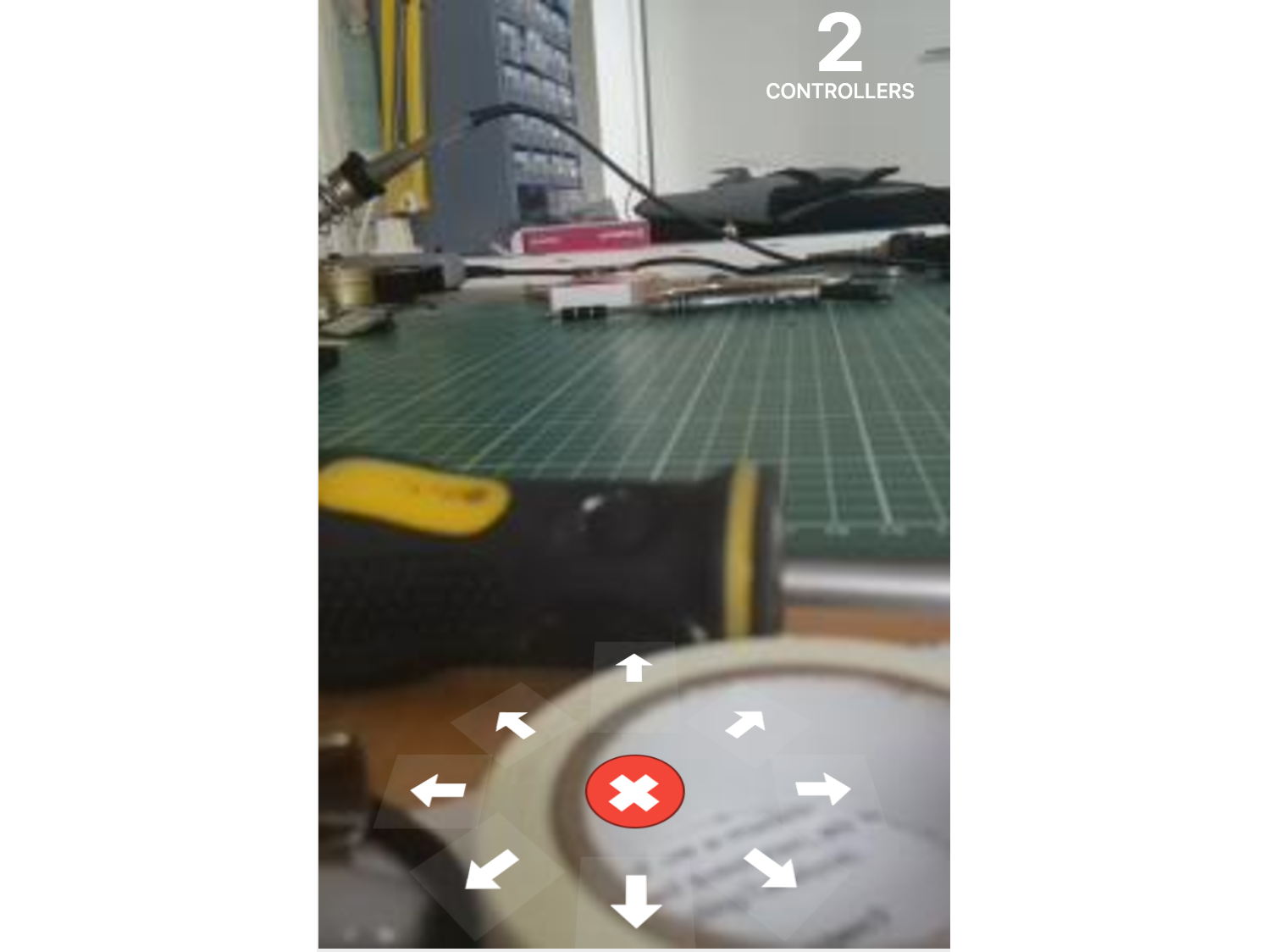 The main data receive block accepts all data from the server and assigns it onto the $scope to update the interface. Image data from the camera is sent as raw bytes, so to get it into an img element we need to convert it to base64encoded URL. This would be more efficient to do on the robot/server (avoid every client having to perform this operation) but base64 encoding increases the size of the data transmitted by about 1/3.

Finally, we define a set of wrappers to integrate sockets in our AngularJS application. This ensures that changes to the scope that are triggered by websocket events are detected — and the view updated.

Note the (optional) use of ROBOT_WS_SECRET to change the endpoints used for communicating with the robot. This is a simple way to prevent a client connecting, pretending it's the robot, and broadcasting naughty images to everyone. If you set this value, just make sure you set it to the same thing on both the robot and server (via the environment variable) or they won't be able to talk to one another.

To stop dead clients from continuing to control the robot, we need to expire instructions after INSTRUCTION_DURATION seconds have elapsed.

All communication between the server, the clients and robot is handled through websockets. We assigned clients to a specific socketIO "room" so we can communicate with them in bulk, without also sending the same data to the robot.

User instructions are received regularly from clients (timed-ping) with a unique user ID being used to ensure only one instruction is stored per client. Instructions are timestamped as they arrive, so they can be expired later.

The robot camera stream and instruction/status loop run separately, and connect to different sockets. Updates to status are forwarded onto the clients and responded to with the latest instruction buffer. The camera image is forwarded onwards with no response.

The robot is implemented in Python 3 and runs locally on the Pi (see later for instructions to run automatically at startup).

The following constants can be used to configure the behaviour of the robot, but the values below were found to be produce a stable and reasonably responsive bot.

The robot uses 8 direction values for the compass points and intermediate directions. The exact behaviour of these directions are defined in the DIRECTIONS dictionary, as a tuple of direction and magnitudes for the two motors.

The average of all client's input direction angles are combined using complex math to convert the angles into vectors, sum them and calculate back the angle of the resulting single point. You could also do this using the sum of sines and cosines.

We iterate over all the client instructions, calculate an average angle and magnitude, and count totals for each direction (to be sent back to the clients).

The average control data is converted to motor instructions using the DIRECTIONS dictionary defined earlier. Because of the way that multiple client instructions are combined and then multiplied motor speeds can end up > 255, so we additionally need to cap these.

We collect incoming messages and store them in the instruction list. This is emptied out on each loop before the callback should hit this function — we delete it in the main loop in case the callback fails.

Streaming the images from robots is heavy work, so we spin it off into it's own process — and using a separate websocket to the server. The worker intializes the camera, opens a socket to the server and then iterates over the Pi camera capture_continuous iterator — a never-ending generator of images. Image data is emitted in raw bytes.

The main loop controls the sending of robot status updates to the server, and receiving of client instructions in return. The loop is throttled to UPDATES_PER_SECOND by setting wait locks at the end of each iteration. This is required to stop flooding the server with useless packets of data.

The code repository contains the files needed to get this set up on a Heroku host. First we need to create the app on Heroku, and add this repository as a remote for our git repo.

The app name will be the subdomain your app is hosted under https://<app-name>.herokuapp.com. To push the code up and start the application you can now use:

Note that if you are going to set a ROBOT_WS_SECRET on your robot (optional, but recommended) you will need to set this on Heroku too. Random letters and numbers are fine.

Copy the robot code over to your Pi, e.g. using scp

You can then SSH in with ssh pi@raspberrypi.local. First install the PiCamera and then MotorHAT libraries from Adafruit (these work for the non-official boards too).

You can then install the remaining Python dependencies with pip, e.g.

We are using a non-standard version of SocketIO_client in order to get support for binary data streaming. Otherwise we would need to base64encode it on the robot, increasing the size of the message by 1/3.

Once the camera is enabled (you may need to restart), you can start the robot with:

The simplest way to get the robot starting on each boot is to use cron. Edit your cron tab using crontab -e and add a line line the following, replacing your ROBOT_WS_SECRET value:

Save the file and exit back to the command line. If you run sudo reboot your Pi will restart, and the robot controller will start up automatically. Open your browser to your hosted Heroku app and as soon as the robot is live the camera stream should begin.

The configuration of the robot (fps/instructions per second) has been chosen to give decent responsiveness while not overloading the Heroku server. If you're running on a beefier host you can probably increase these values a bit.

Streaming JPEG images is very inefficient (since each frame is encoded independently, a static stream still uses data). Using an actual video format e.g. h264 to stream would allow a huge improvement in quality with the same data rate. However, this does complicate the client (and robot) a bit, since we need to be able to send the initial stream spec data to each new client + need a raw h264 stream decoder on the client. Something for a rainy day.