Available under a BSD v2 License.

Wooey is a simple web interface to run command line Python scripts. Think of it as an easy way to get your scripts up on the web for routine data analysis, file processing, or anything else.

The project was inspired by how simply and powerfully sandman could expose users to a database and by how Gooey turns ArgumentParser-based command-line scripts into WxWidgets GUIs. Originally two separate projects (Django-based djangui by Chris Mitchell and Flask-based Wooey by Martin Fitzpatrick) it has been merged to combine our efforts.

Inspired by what Gooey can do, turning ArgumentParser-based command-line scripts into WxWidgets-based GUIs, I thought I'd see if I could do the same for the web. I'm still not sure if the result is beautiful or horrific.

Wooey (see what I did there?) used the same, albeit slightly modified, back-end conversion of ArgumentParser instances to JSON definitions. These definitions are used to construct a web-based UI with type-dependent widgets. Submitted configurations are parsed, using the JSON definition, to command line arguments that are then submitted to a job queue.

Jobs in the queue are automatically run and the results made available in the job view, with smart handling of outputs such as images (CSV, etc. to be supported via pandas, possibly some kind of plugin system) into a tabbed output viewer. Support for downloading of zipped output files is to follow.

The use case for myself was as a simple platform to allow running of routine data-processing and analysis scripts within a research group, but I'm sure there are other possibilities. However, I wouldn't recommend putting this on the public web just yet (pre-alpha warning). It's somewhat comparable to things like Shiny for R, except multi-user out of the box. Support for multiple command-line formats is on my todo.

Built on Flask, using cookiecutter-flask then modified to use the Foundation framework. This was My First Flask App! so please feel free to critique & give pointers.

The front page of a wooey install presents a list of installed scripts:

Each script has it's own UI form based on the config parameters defined in the ArgumentParser:

Documentation can be specified either manually via the JSON, or my providing a Markdown-format file alongside the script or config file.

Logged-in users get a nice listing of their previous jobs: 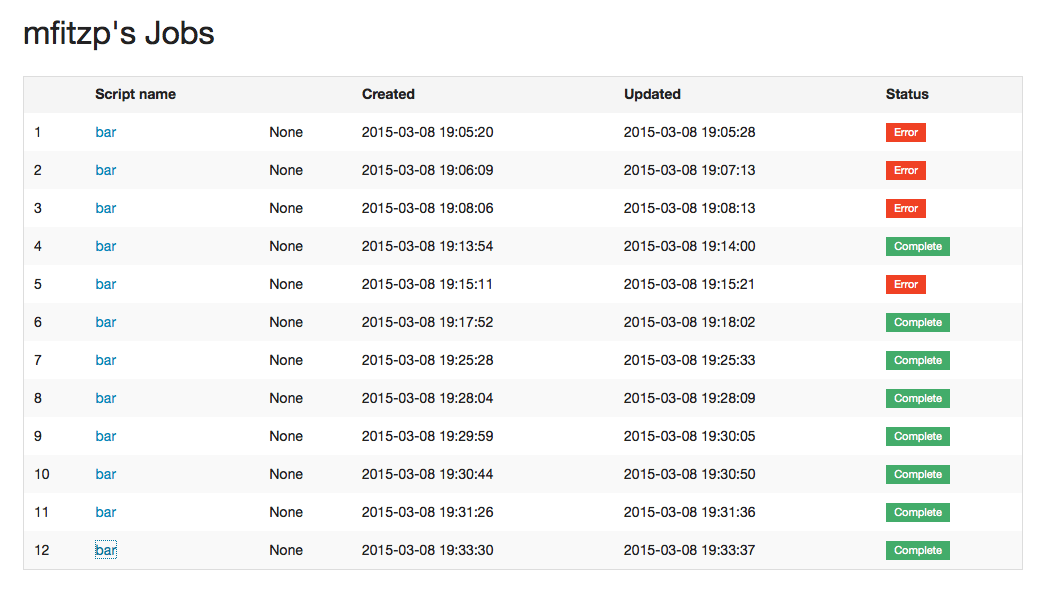 The output from successful jobs is available via an inline viewer (images only presently, .csv support via Pandas to follow): 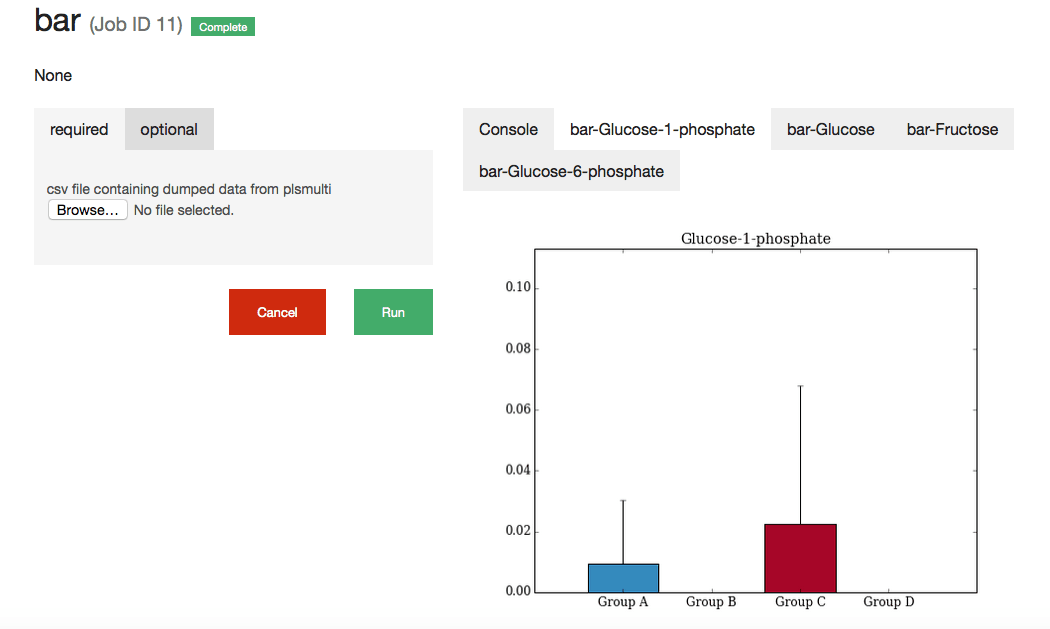 Errors are output to the inline console:

Wooey! is continuing to be developed based on the Django web framework. The ArgumentParser parsing(!) has been moved out of Wooey! and into a separate package clinto.

As mentioned in the previous post, I recently migrated this site over to the very clever Pelican. Setting it up was relatively straightforward using a combination of the official docs, this post and linked github repo from Dominic Rodger. That said, there were a few things that I stumbled at … More