Control memcached from the command line

memcached is a general-purpose distributed memory caching system originally developed by Danga Interactive for LiveJournal but now used by many other sites. It is often used to speed up dynamic database-driven websites by caching data and objects in RAM to reduce the number of times an external data source (such as a database or API) must be read. Here we describe the options available from the command line to control a memcached instance via unix socket or IP:port. 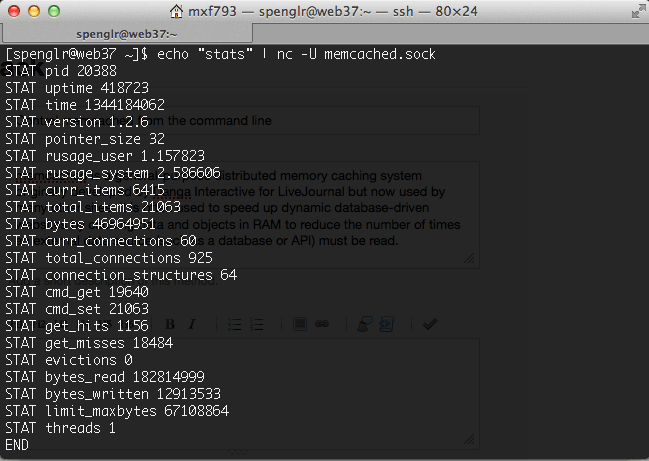 Memcached can be set up to either take control commands via an IP address and port or via a unix socket.

To start up an instance of memcached listening on localhost port 11211 only use the following:

memory is the maximum number of megabytes of memory you want memcached to use.

If you want to specify a different port to listen on use the -p PORT option.

Alternatively you can use unix sockets to communicate directly with the memcached instance. In this case commands can only be sent from a login shell that has access to the socket file - for example if you ssh into the server hosting it.

To start up memcached using unix sockets you would use the following command:

This will create a file named memcached.sock in your home directory to communicate through.

Memcached comes with a number of useful management commands. Of these the most frequently useful are flush_all and the stats commands including stats, stats items and stats slabs.

To send a command to memcached you can use nc (netcat). The general form for all commands is:

Or for socket connections:

To flush the entire contents of your memcached instance you could issue the flush_all command with one of the following:

You can use the stats commands to get information about the state of your memcached instance. For example:

Will output a list of stats for the current instance. Additional information can be found using stats items to give total stats about items stored in the cached and stats slabs which provides more information including performance hints.

Control memcached from the command line was published in tutorials on February 05, 2012 (updated April 28, 2021)