Django ships with it's own comments contrib app that provides commenting on arbitrary models. However this is a flat-comment system which doesn't allow replying to comments. An app called django-threadedcomments exists but has not been updated for a number of versions and is broken. Other alternatives are less flexible than the Django commenting system itself.

Here we demonstrate a simple method to get threaded comments in Django using a combination of the inbuilt comment app and the mptt app. 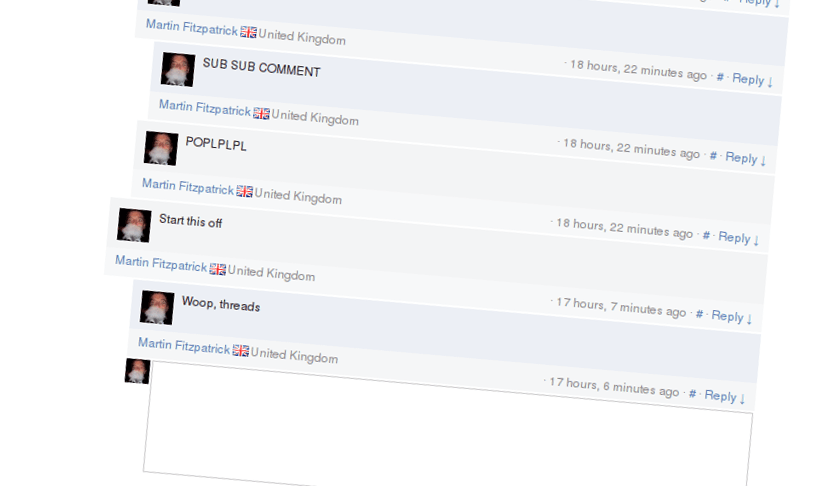 For this method you will also need django-mptt

Django-mptt implements Modified Preorder Tree Traversal with your Django Models to produce working trees of Model instances. It achieves this by adding a number of hidden fields to your model. We're we're going to amend the inbuilt comments model (through class inheritence) to add these fields for django-mptt, then add some tweaks and hooks to make it all work together nicely.

The full django-mptt documentation is worth a look.

To begin with you will need to install all the constituent parts. First install django-mptt and add mptt and Django contrib comments apps to your INSTALLED_APPS in your settings.py

Also you need to add your own comment app (that we're creating here) to your INSTALLED_APPS so you may as well do that now - we've called ours rather simply comments'.

Next add the following somewhere in your settings.py file:

This tells Django where to go looking for comment-related tweaks you've created.

Now let's create the app! In your ~/my_project/apps/ folder create a new app with:

This will create a folder with __init__.py, models.py, tests.py and views.py

Now we need to create the amended model, adding in the mptt fields. Thankfully django-mptt makes this remarkably easy, we only need to inherit from the MPTT model class and add a single field. So, here is our completed model (in models.py):

That's it. Note we've added the submit_date insertion for ordering.

Next we need to provide an amended form that will contain this parent field, so it can be correctly set and saved to the database. So create a new file called forms.py and enter the following:

Django comments extensions work on a simple principle: you tell the comments app about what you've changed through the use of some simple hooks. Django then uses these hooks to lookup your altered models and forms and overrides the default set. So now that we've created our modified forms and models, we need to point Django at them.

To create these hooks you'll need to edit the __init__.py file, so open it now. Enter the following:

For more information on what is going on here have a look at the Django documentation for customizing comments.

Now create a template for handling the comments. It is useful to have this as a separate include file, e.g. called _comments.html that you can then call into another template. The example here expects the comment to be attached to an object called object so you may need to wrap the include {% with <yourmodel> as object %}{% include "_comments.html" %}{% endwith %}.

Finally, you'll need to amend your comment form to include the parent_id when posting a reply to another comment. So open the template in comments/form.html and enter:

The key point is the inclusion of the parent field.

If you haven't already you can copy the default Django template from the contrib folder into your own templates folder to allow you to edit it.

Fire it up! Have a test replying to comments both at the page, and threaded level. It should all work perfectly, but if not feel free to ask for help in our - threaded! - comments.